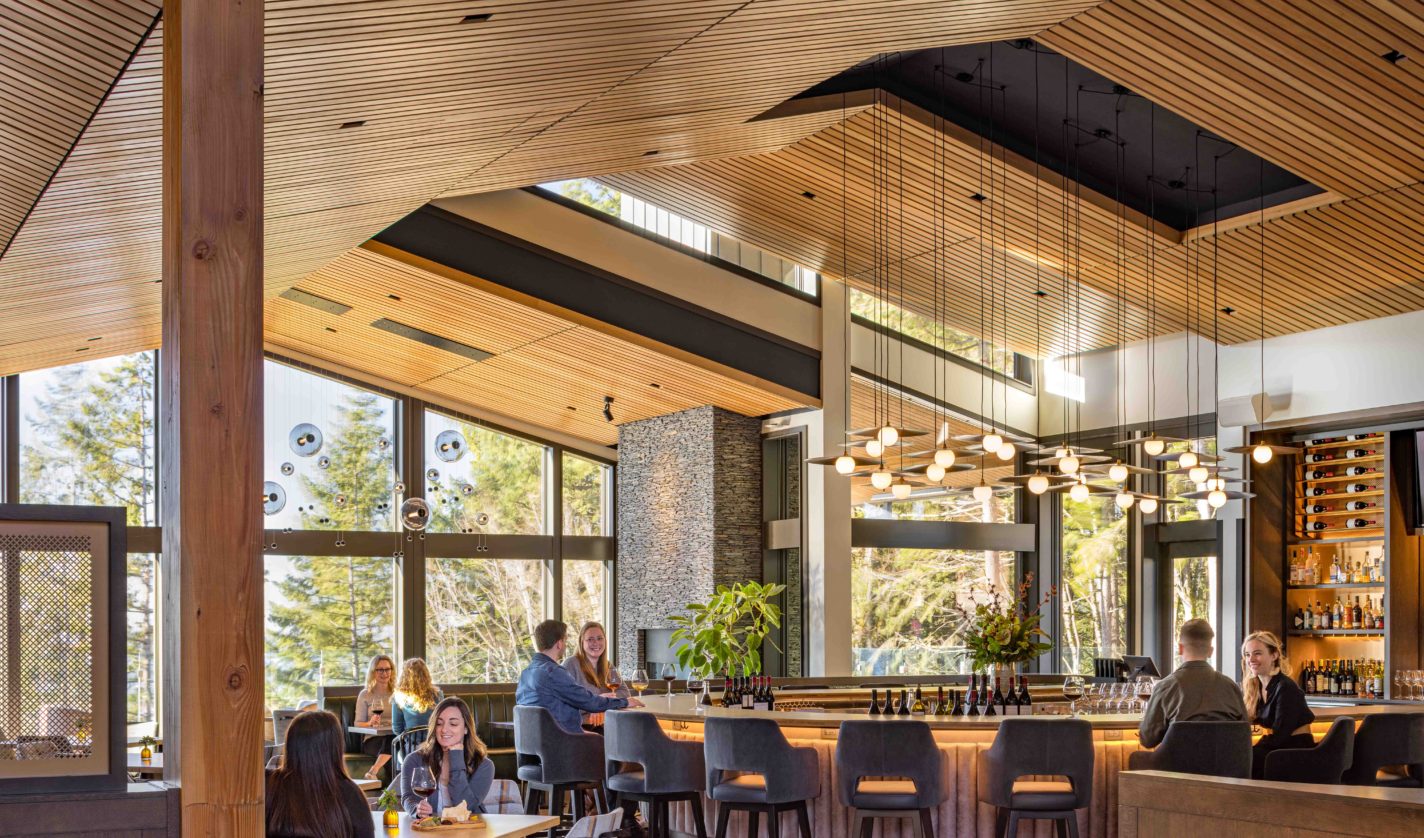 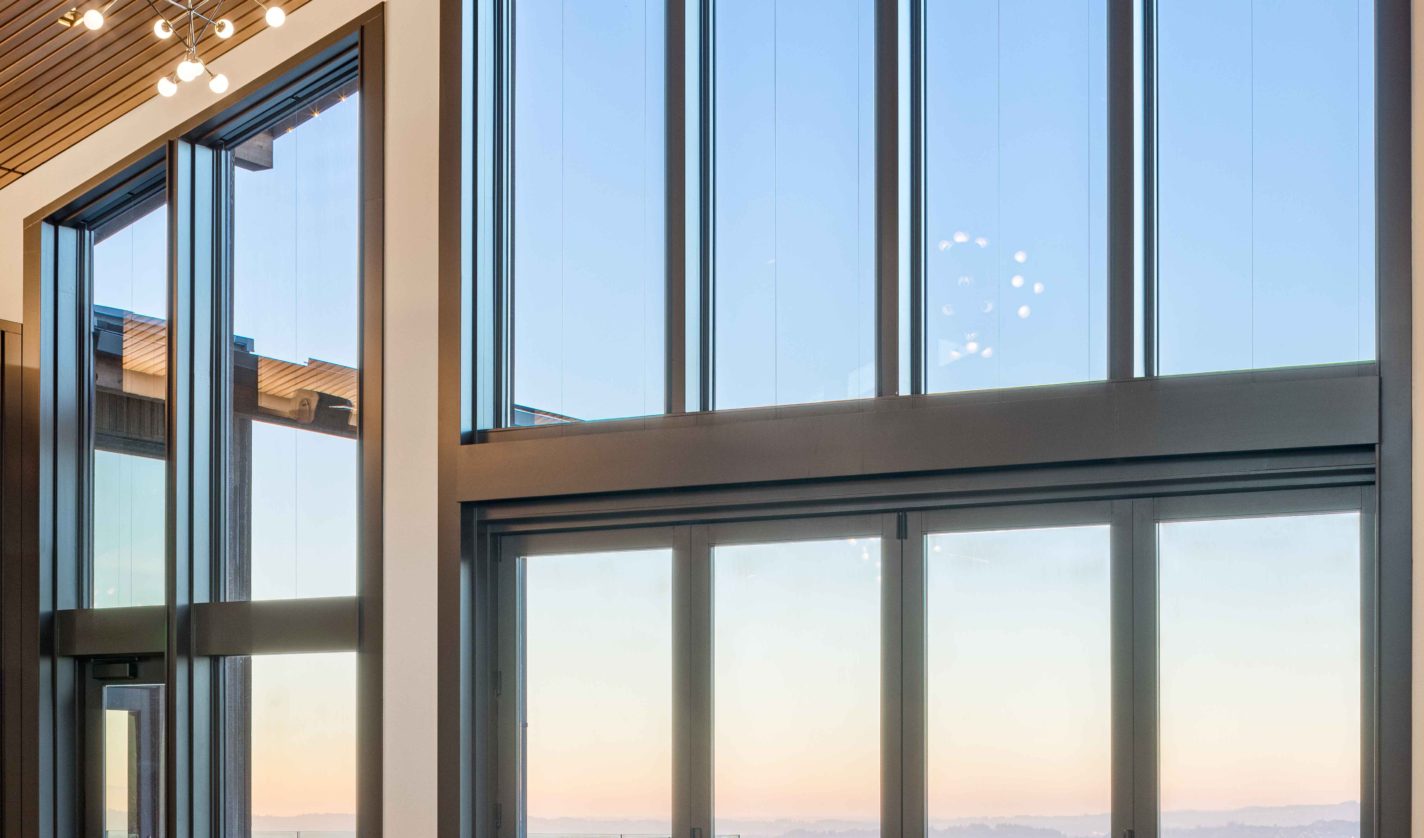 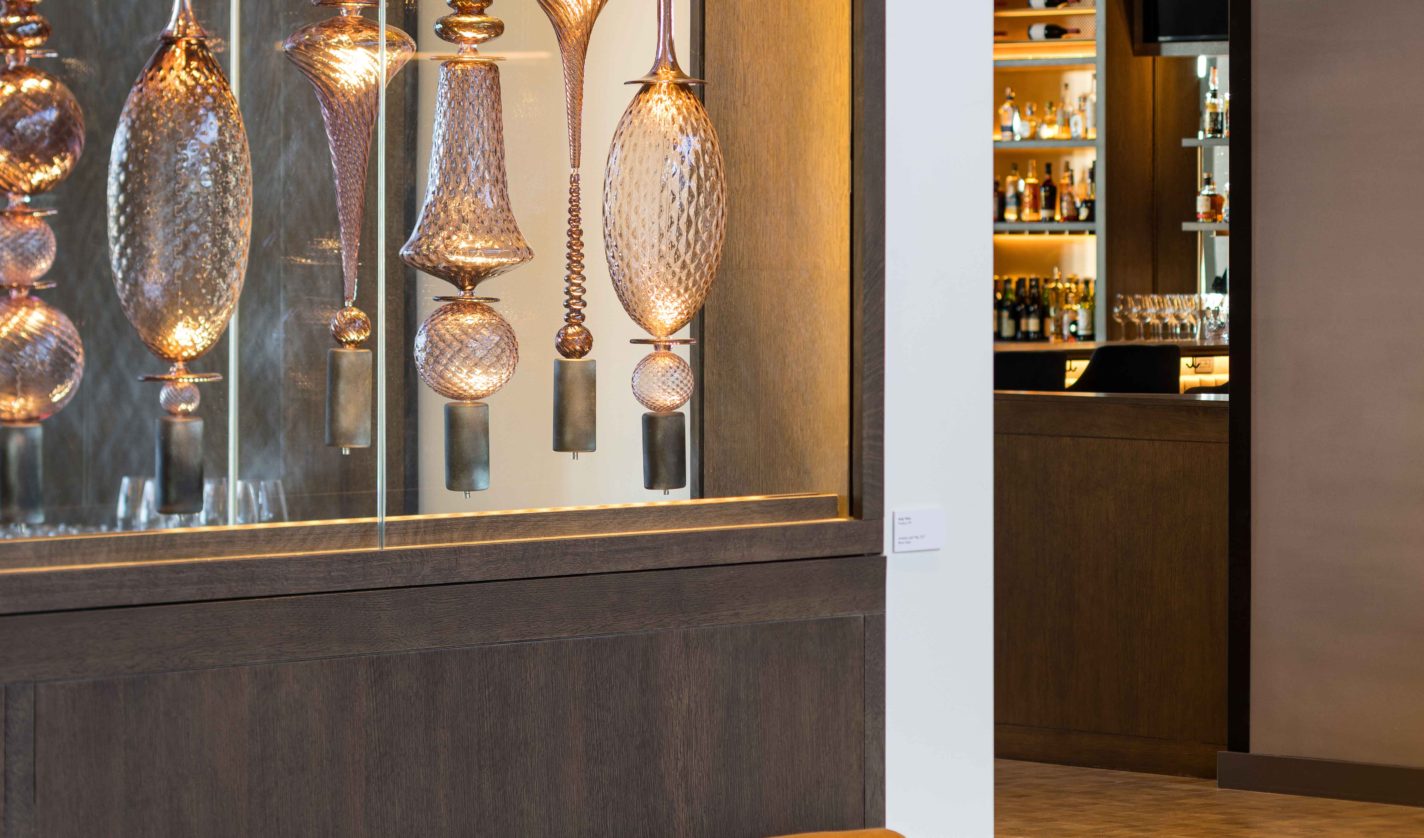 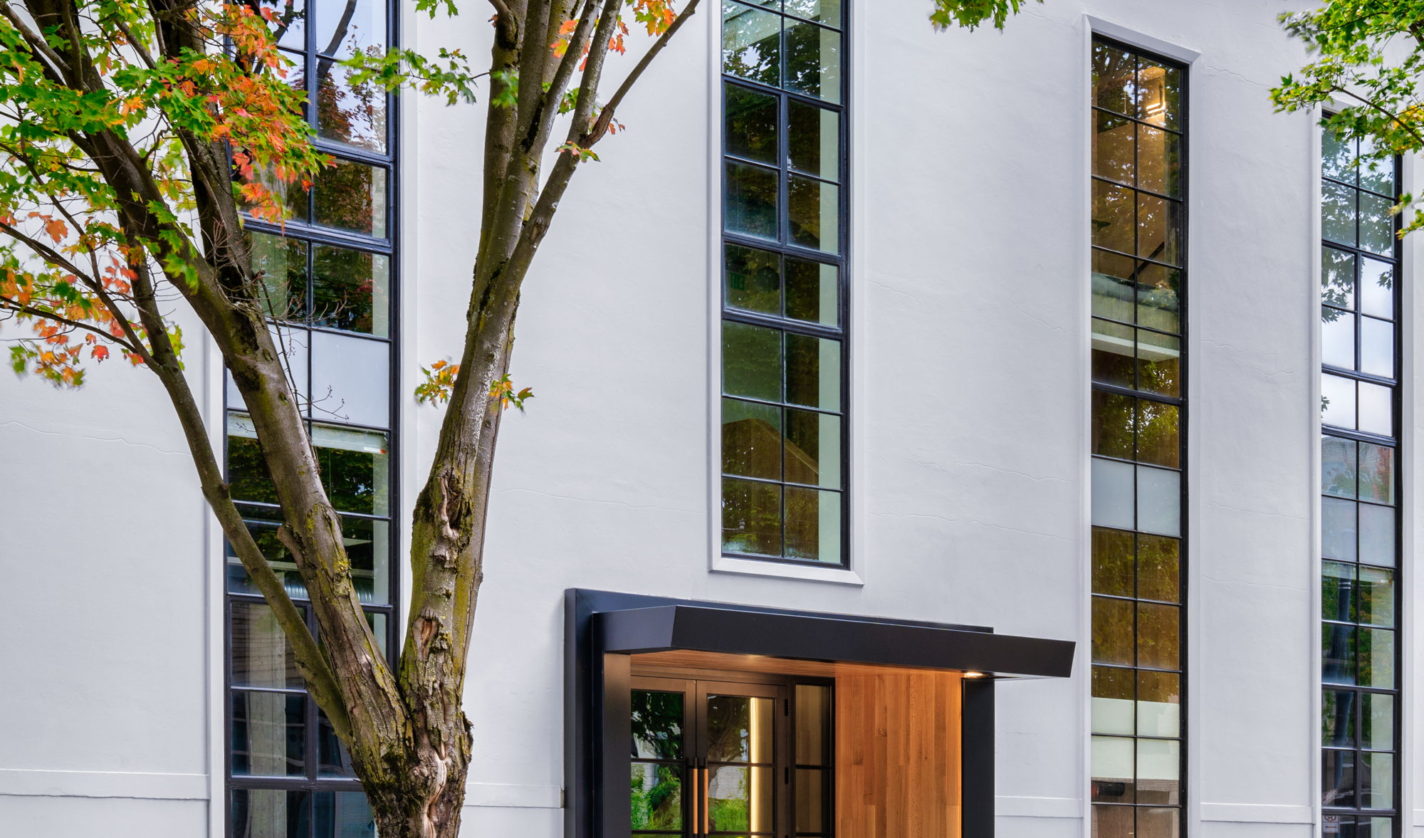 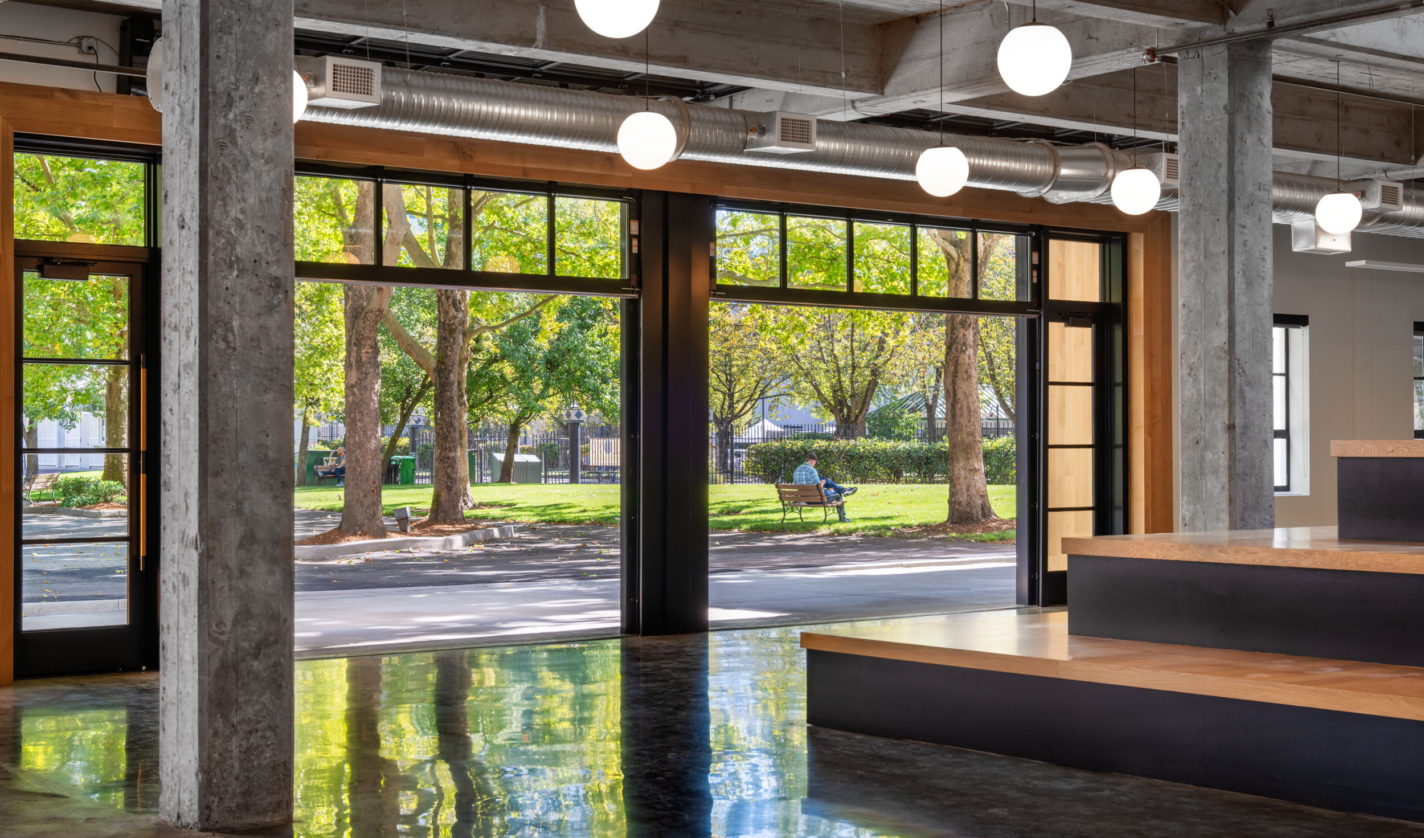 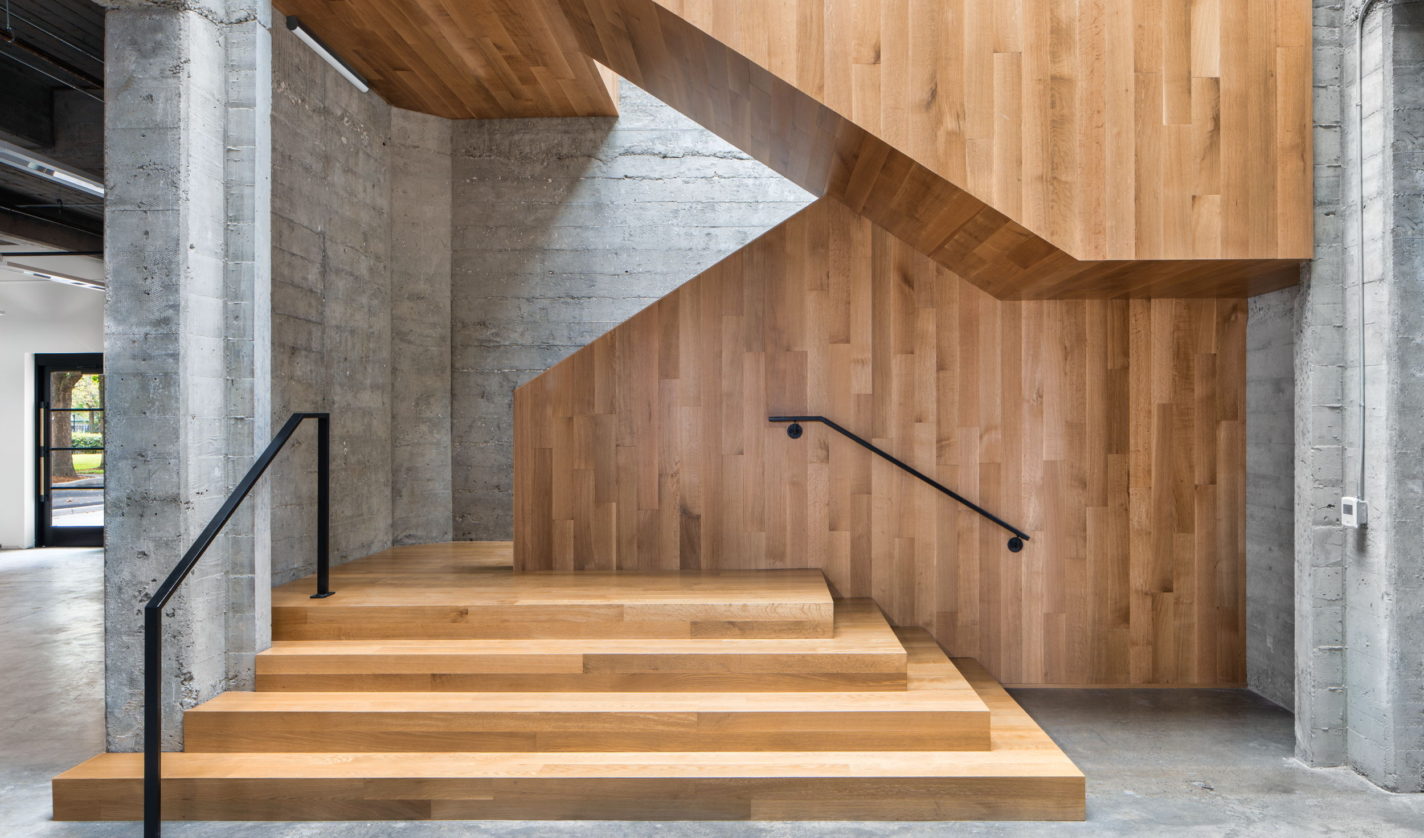 In ORS 710, we opened existing stairwells and created wood-clad stairs as a design element; we created new entry portals and added a roll-up garage door to give access to the Plaza as a “backyard” to the building; and for staff, we added a new bleacher seating element for all-hands type meetings. The existing structural systems included one-way beams with a thin slab. Working within this existing structural framework of beams and girders, GBD strategically located and limited the floor openings for open seating, stairways, and roof skylights over the lobbies. Many existing slab openings were discovered, along with select new required mechanical openings, and needed to selectively reinforce with steel supports or FRP banding where feasible and in visually sensitive areas. Our structural engineer conducted extensive calculations and verifications on the lateral/vertical loads to test and verify a variety of combinations to finalize the design. While maximum openness throughout the floors was the goal, ultimately the need to reinforce most of the solid concrete shear walls for lateral stability. In turn, the structural requirement created a design opportunity to utilize these solid walls as a textural backdrop and contrast to the wood feature stairways. The second challenge in creating maximum openness and visibility for both lobbies and stairways was the need for a rated enclosure on the three-level stair from basement to roof levels. This required a detailed design and construction effort. Starting and stopping the rated enclosure proved difficult with the desire to create an open stair between two occupied levels. The existing structure required a scrupulous threading between new steel frames, light framing, and a custom finished wood stair/walls/railing. The light shines through a connection of wood with stadium seating and circulation, extended through moveable glass walls.  The new Stairwell and light wells and roll-up door give an enhanced environment to the space that offers more flexibility to the tenants.

GBD Architects was retained for the interior design of the third level (approximately 17,000 SF) that features the restaurant, event center, offices, and gallery space. Design inspiration came from another of the region’s defining features – its abundant source of water that flows down the mountain valleys in streams and creeks. Taking a cue from the building’s exterior, the design team articulated the interior ceiling planes to mimic the dramatic undulating gables of the roof structure. Treating these complex geometries with a single natural wood material that continues from space to space evokes that sense of flowing water. The addition of clerestory glass below the wood ceiling provides a further sense of connection between the various spaces and the dramatic view beyond. A primary goal for the interior was to create a unique and honest space that could stand on its own without competing with the coveted views. Decorative lighting is minimal and used carefully, only when needed to create a sense of scale or place within the cavernous volumes. Other lighting and ceiling elements are kept minimal and hidden where possible to keep that flowing ceiling plane clean and preserve the outward views from the floor-to-ceiling glass windows. GBD faced challenges from an interior design perspective. The challenge was integrating the core and shell architecture from a singular space into
very distinct uses throughout the third level. Working with Amaterra’s team and Emerick, GBD was able to beautifully marry the two seamlessly.